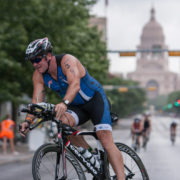 AUSTIN, Texas – May 27, 2019 – 2,000 triathletes crossed the finish line at the sold out 29th annual Life Time Tri CapTex, presented by Verizon – one of the nation’s most popular triathlons and a tradition in Central Texas since 1991.

Austinites were joined by triathletes on Memorial Day from eight countries and 33 states for the 32-mile swim-bike-run event that began in Lady Bird Lake, followed by a bike ride up Congress Avenue to the Capitol and back south for a loop along Cesar Chavez Street. Finally, the triathlon concluded with a run that looped through West Riverside, Butler Park, Barton Springs Road and finished at Vic Mathias Shores.

The top performers were Mark Saroni (1:54:07) and Sierra Snyder (2:06:40). Saroni raced his first Life Time Tri CapTex in 2003 at 14-years-old, and this was his first win after six previous attempts and hundreds of other triathlons over the past eight years. He is currently a triathlon trainer at Paragon Training in San Antonio.

Today was Snyder’s seventh Life Time Tri CapTex and her second first place win since 2010. Snyder is a  mother of two and a Physician Assistant at St. David’s Healthcare. She dedicated her victory today to her father who she recently lost.

“The Life Time Tri CapTex was sold out for the first time in a decade and we are incredibly honored to have the immense support from the CapTex triathletes and Austin community,” said Life Time Tri Brand Manager Scott Hutmacher. “It’s particularly special for us to host the triathlon on Memorial Day and to honor our nation’s fallen heroes who inspire countless Americans to work hard, sacrifice and push themselves past known limits. For so many of us, that’s what competing in triathlons is all about.”

The CapTex Tri is the final qualifying event into the 2019 Life Time Tri Championship race that will be held on July 21, 2019 at the Verizon New York City Triathlon. 200 of today’s top performers will qualify for the invitation-only event, competing among the nation’s best amateur athletes for $60,000 in cash and prizes.

Official results for all race finishes are available here: https://www.athlinks.com/event/36095/results/Event/843739/Results.

The 2019 Life Time Tri CapTex is one of the eight events around the country that are part of the Life Time Tri Series, which is committed to providing premier triathlon experiences in iconic U.S. destinations that include Chicago, Miami, Minneapolis, New York City, San Diego, South Beach, and Tempe, AZ, in addition to Austin. For more information, visit www.captextri.com.

The Life Time Tri CapTex is owned and produced by Life Time, the premier healthy lifestyle brand. It is among more than 30 premier athletic events owned by the company, including the Miami Marathon, the New York City Triathlon, the Leadville Race Series, and the Dirty Kanza.

Give Aquajogging a Try
Scroll to top